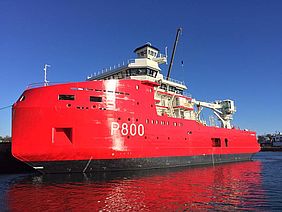 L'Astrolabe, the vessel owned by P&O Maritimes Services and chartered by the French polar institute IPEV for the resupply of Dumont d'Urville and Concordia stations is 30 years old. Her last voyage will happen in early March.
She will be replaced by a new polar vessel (Polar Code IB5), 72 m long, 4 x 1600 kW engines, 60 berths (crew and passengers). The name of this new vessel will be the same: L'Astrolabe.
The "Terres Australes et Antarctiques Françaises" (TAAF) will be the owner and the construction cost, about 50 M€, will be shared between TAAF and IPEV. The French Navy will operate the new vessel year round and will support IPEV's logistic mission in Antarctica during 120 days per year between mid‐November and early March.
The vessel is currently under construction in the French shipyard Piriou, in Concarneau (France) but the hull was built in Poland. The Finish Aker Arctic Company is also involved in the design of the vessel and the French company Marine Assistance is the project manager.
This new vessel, based on an original partnership between TAAF, IPEV and the French Navy, will be ready for her first Antarctic season in November 2017 from Hobart, Tasmania, which will remain the port of departure of the French Antarctic expeditions in the future. The new L'Astrolabe will strengthen the French logistics capacity in Antarctica for station resupply and science support.