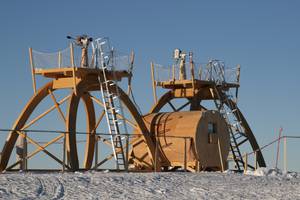 At the plenary meeting in Krakow (14-15 April 2013), considering  the European Polar Infrastructures Assessment edited in 2005 in the framework of the FP7 EC Project EUROPOLAR,  the EPB endorsed the idea of updating the information on European polar infrastructures. The EPB noted that INTERACT has a produced a high quality catalogue on the same subject and suggested referring to this successful template. IPEV was charged with implementing an action plan and contacting INTERACT, IASC and FARO to explore potential  cooperation and sharing of information.

IASC and FARO confirmed their endorsement of the project. INTERACT expressed a strong interest in cooperating with EPB. A meeting in Helsinki, during the ASSW 2014, identified the main topics of mutual interest; a Memorandum of Understanding between EPB and INTERACT was drafted and will be implemented shortly.

The EPB has suggested using the internet as a tool to keep the document alive and updated, as well as having printed documents which are more suitable for dissemination.