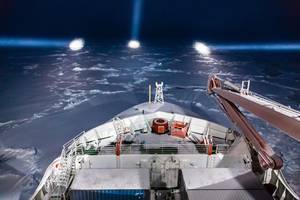 EUROFLEETS 2 is an EU funded project providing scientists with 200 fully funded days of ship time and 104 fully funded days of marine equipment to carry out ship based research activities within any field of marine sciences. It started in March 2013 for a duration of 48 months with funding of 9 M€ and 31 partners from 20 European and associated nations. It includes a polar component which is addressed in Work Packages 3 and 5, a Polar and Sub-polar Call, a Super-integration Call and an Embarked Equipment Call that were launched during 2013.

On 01/04/2014 the GA Meeting of the European project EUROFLEETS2 was held in Rome, Italy, at the invitation of the National Research Council (CNR). More than 60 scientists and research fleet operators from all European eco-regions attended the GA. As for the polar component, six full proposals were submitted to EUROFLEETS 2 in the framework of the ‘Polar and Sub-polar’ Call 2013, of which three proposals were selected for funding. The funded proposals will get access to 19 days at sea fully funded by the EC. A second regional call for polar areas to carry out ship based research activities in polar/ sub-polar areas, North Atlantic, North Sea, English Channel, Celtic Sea, Baltic Sea and Bay of Biscay was also launched. More information can be found at  www.eurofleets.eu/np4/362.html