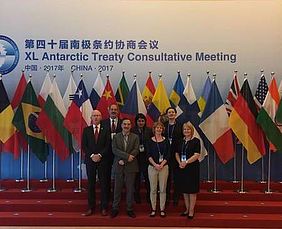 Several members of the EPB Plenary have been in Beijing for the Fortieth Antarctic Treaty Consultative Meeting (ATCM XL), as part of their national delegations. According to the Treaty, parties meet each year "for the purpose of exchanging information, consulting together on matters of common interest pertaining to Antarctica, and formulating and considering and recommending to their Governments measures in furtherance of the principles and objectives of the Treaty".

The Antarctic Treaty was signed in Washington on 1 December 1959 by the twelve countries whose scientists had been active in and around Antarctica during the International Geophysical Year (IGY) of 1957-58. It entered into force in 1961 and has since been acceded to by many other nations. The total number of Parties to the Treaty is now 53.

The main purpose of the Antarctic Treaty is to ensure "in the interest of all mankind that Antarctica shall continue for ever to be used exclusively for peaceful purposes and shall not become the scene or object of international discord."

Some important provisions of the Treaty:

-          Freedom of scientific investigation in Antarctica and cooperation toward that end … shall continue (Art. II).

-          Scientific observations and results from Antarctica shall be exchanged and made freely available (Art. III).

More information about the Antarctic Treaty System and its various elements can be found at http://www.ats.aq/index_e.htm.

More information about ATCM XL in Beijing can be found at http://atcmxl.mfa.gov.cn/.