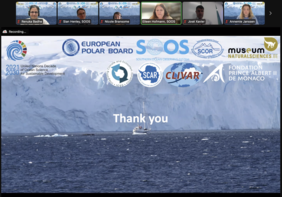 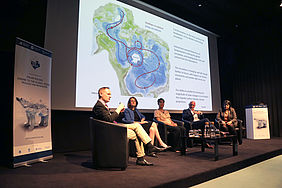 On Monday, 27 June the European Polar Board hosted two events in conjunction with the UN Ocean Science Conference, held in Lisbon, Portugal.

The in-person session, "Polar Oceans, Engine of the Global Ocean" featured opening remarks by HSH Prince Albert II of Monaco. The speakers presented on topics including ocean acidification, sea-level rise, the global importance of the polar oceans, and the links between the Southern Ocean Action Plan, the Arctic Ocean Action Plan, and the UN Decade of Ocean Science.

The online session, "From the Southern Ocean to the Arctic - A Call to Action via the UN Ocean Decade" featured five speakers followed by a panel discussion with seven participants. The speakers discussed the links between the Southern and Arctic Oceans, both regarding respective Action Plans and the role of young researcher and NGO participation. The discussion panel expanded on the role of ocean science organizations in implementing the Action Plans, and ended with a call to action for further coordination and boosting the importance of polar ocean research. A recording of this session is available here.