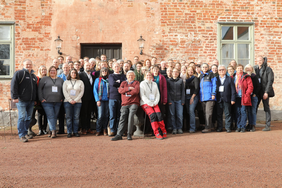 Four years of EU funding has been granted for another round of INTERACT. Beginning on the 1 January, INTERACT III is now up and running. The kick-off meeting was held in southern Sweden 3-4 February back to back with a Station Managers’ Forum for INTERACT II and III. Having previously collaborated with INTERACT on varieous activities, the European Polar Board is a full project partner in INTERACT III.

“Climate change in the Arctic is proceeding twice as fast as in the rest of the world. However, as it is a large area and few people live there, not much data exists, and data is crucial if we are to be able to adapt to climate change”, says Margareta Johansson, polar researcher at Lund University and coordinator of INTERACT.

INTERACT is a collaboration between 17 countries and 86 research stations in the Arctic and neighbouring high alpine areas. The project began in 2011, funded by the EU’s framework programme FP7. Since the start, around 900 polar researchers have been able to go to the Arctic and conduct field work due to Interact. In 2016, the polar researcher Margareta Johansson at Lund University was assigned to coordinate the project. The work has progressed well and the University was given a mandate by the Interact network to apply for a follow-up project. This has now been granted and Lund University will receive a further EUR 10 million for the project, which will run for four years, starting on 1 January 2020.

“This means that we will be able to send a further 450 polar researchers to carry out field work in all parts of the Arctic. We have established a cross-border collaboration that works extremely well. Therefore, it feels especially pleasing to continue working on these important issues”, concludes Margareta Johansson.