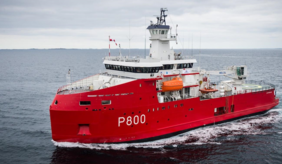 L’Astrolabe has been launched in Concarneau by the French Southern and Antarctic Lands (TAAF), the French Polar Institute Paul-Emile Victor (IPEV) and the French Navy.  With IPEV, the new Astrolabe will support French research in Antarctica, supplying the Dumont d'Urville and Concordia stations.

The new 72 metre long vessel replaces the ship (also named Astrolabe) which had been supporting French research activities in Antarctica for many years, and made its final voyage for IPEV in March 2017.

IPEV, a Member of the European Polar Board, is the resources agency for furthering French research in the polar regions.